Last months uproar over Tamika Mallory’s attendance at Louis Farrakhan and the Nation of Islam’s (NOI) annual antisemitic rant reminded me of the long, storied, and strained history of relations between our two communities: African-American and Jewish. There was, and continues to be, a profound tone-deafness on the part of Ms. Mallory and her defenders to just how vile and toxic Farrakhan and the NOI is in the Jewish community. But the Jewish community also needs to recognize the tone-deafness and racism that exists within us.  Lest you think it is just a Republican Jewish thing, I assure you it is not.

To give just one example, affirmative action was long seen by Jews across the political spectrum as an offensive program. Jews had long been subject to quotas on the number permitted into the elite institutions of higher learning, particularly the Ivy League. It was so bad that the community created its own, non-sectarian University, Brandeis, (my Alma mater). Given our history with quotas, the ambivalence to a program that seemed to create quotas for groups was understandable.  It was also wrong.

The reasoning went like this. Jews had overcome discrimination in the United States and we were a success. Why couldn’t Black America, with the abolishment of Jim Crow, the voting rights act, and the fair housing act (which also benefited Jews who had been redlined too), become as successful a community as we had?

This reasoning has always demonstrated a profound lack of understanding about the difference in the experiences of the two Peoples. While we had fled our oppressors and thrived in a new land, African-Americans were in the land of their oppressors and could not flee. Discrimination didn’t stop because of some laws. It continues today. And despite the incredible obstacles to success that African-Americans continue to face, there are countless successful members of the community in all realms of human endeavor. What’s more, there always have been. That’s truly remarkable.

So, while we fret about Farrakhan’s vile antisemitism and Tamika Mallory’s continued offensive responses, we should also do some soul-searching about our own tone deaf  behavior. Langston Hughes did so in his epic poem from 1951, Montage of a Dream Deferred, in the section entitled “Likewise”. Perhaps we should think about emulating his call for understanding. 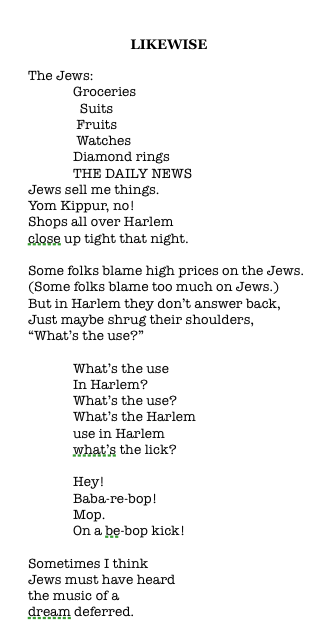